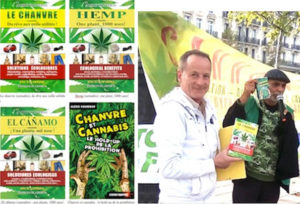 Alexis Chanebau, at the origin of the revival of the hemp festival (included in the French Republican calendar in 1793) with Farid Ghehioueche, place de la République in Paris, in 2019.

START
Like Jack Herer in the US, I argue that cannabis prohibition is at the origin, a simple industrial conspiracy as it exists every day (Alsthom, Nissan, etc.).
Indeed, hemp is the No. 1 vegetable competitor of polluting multinationals based on chemicals or petroleum, and the most prolific tool of ecological independence, without insecticides: superfood (seeds, oil), insulation, construction, organic fuel, bio plastic, textiles, plumbing tow, 4 times more paper than wood, ropes and sails, filaments for 3D printers, super-capacitors, immense hope in medicine, etc.
I have compiled 25 years of diligent research on the subject into an encyclopedia, updated in December 2019, in various formats :

MOTIVATION
My discoveries about the glorious past of hemp, once cultivated without THC control, essential for ropes and veils, paper, clothing or bags, opened doors for me, helped fight obscurantism and reassure more sceptic people, the multiple applications of hemp being hidden behind a “smoke screen”.
I thus collect thousands of historical documents including Buddha, Joan of Arc, Rabelais, Washington or for example Jean Jaurès, former French deputy testifying :
« In Lille, the manufacture of hemp cloth employed 52,000 workers in 1812, instead of 26,000 in 1800.

« I end this presentation with an appropriate quote from General De Gaulle (his 1st official speech to new recruits in 1912), which I recently discovered: “If I take a hemp thread all by itself and pull it a little hard, it breaks. If I take another then, then a third, ten and twenty, it is all the same. But if, all these threads, I tie them together, make a strong rope out of them and there is no way to break it, we can use it. » (Charles de Gaulle, Letters, notes and notebooks, volume 1: 1905-1918, 2014). 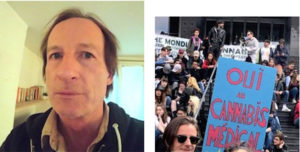 I therefore defend the urgent free cultivation of hemp, stigmatized since 1961 by a fraudulent worldwide prohibition, in the interest of the people, of the planet, by all means (legalization), because it is indeed the same plant, it all depends on what you do with it!

Slogans composed :
“Hemp: determining in the past, indispensable for the future ! »