The Gardener’s Freedom (Illustration by Phix)

Youth : Schooled in the Paris region, good pupil in primary school, I stand out for my interest in helping people with reduced abilities. I obtain the school prize for camaraderie and excellence. I leave the conventional secondary school cycle following the reading of the subversive science fiction novel by D. Adams Hitchhikers Guide to the Galaxy. I turn to studies in technical and artistic fields such as advertising, design, make-up and special effects, computer science, as well as to working in various positions on a film set.

Cannabis experience : A user of poor-quality cannabis since my 17th, I quickly became interested in Dutch cannabis gardening. La Première Journée Internationale du Cannabis in Paris (1993), organized by CIRC and Éditions du Lézard, allowed me to meet the greats of international activism: James Burton, Chris Conrad, Ben Dronkers, Jack Herer. This is the start of my cannabis activism.
As a member of CIRC (Collective for Information and Research on Cannabis) I help beginners in gardening as an advisor and I participate in the writing and / or correction of various books on the subject in French.
Eager to pass on my knowledge, I in turn created an associative structure : PAKA in 1994, followed by an associative shop dedicated to all products derived from industrial hemp or intended for its cultivation at home: Chanvre (French for Hemp) et Compagnie, in 1998.
This was considered to be the first Global hemp activist shop in France.
The entry into service in 2000 of a line of luxury bird cannabis seeds – Grainaoizos – to stimulate reproduction of ‘forgotten’ seeds helped to boost self-production.

Between 1998 and 2003, I organized eco-fairs dedicated to therapeutic cannabis, self-production and industrial applications of hemp. The 2003 fair was organized at the Cité des Sciences et de l’Industrie of Paris, a building owned by the Ministry of Culture and despite police pressure and the administrative closure of the store, it could take place without further incidents. Following this show, the number of similar stores increased from 3 to 400 across the country, creating a real explosion in cannabis gardening in France.
Following the success of the show, the authorities quickly put a tax check on the store so that I could not continue my shows. Subsequently, justice ended its prohibitive duty and in 2008 the shop had to close. In 2014 I was convicted after having filed a complaint against Unknown for theft of 600 grams of hemp which I needed for medical treatment. The thief was never bothered.

Facade (by Gaël Denhard and Coma Lucide) of the « Chanvre » shop at Montreuil and poster of the 4th Fair.

Motivation: During my last trial, on appeal, the judge told me that if I wanted to continue my cannabis activities, I had only to go and live abroad. Forced emigration ? For defending my rights as a citizen ? No, never. I am French, and France is where our fight is to be waged.

Hemp must be available to all French people. 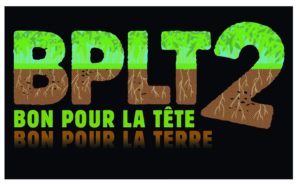 (BPLT2, emblem of the 1969 slogan Bon Pour La Terre, Bon Pour La Tête (Good for the Earth, Good for the Head) by Sylvain Goujon, Swiss hemp activist, for the June 1993 ‘Appel du 18 Joint’ (the Call of the 18th Joint), the annual June gathering calling for the legalization of cannabis in France. (In French the word ‘joint’ and the word for the month of June, ‘juin’ are pronounced in the same way) .